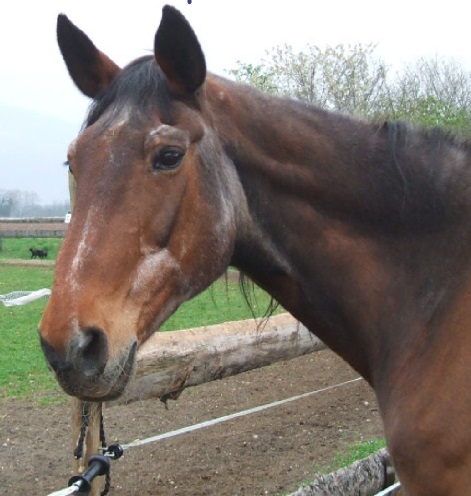 Nonnina, a Westphalian, was already elderly when she arrived at the Shelter. Born around 1965 she was 30 plus years old… a considerable age for a horse!

She became the adoptive mother of a Shelter colt whose mother had died and when the colt was grown Noninna joined her friend Bianca in a large paddock to enjoy her much deserved leisure but Nonnina became depressed. She felt neglected and her hind legs swelled up. Because of this she was once again involved in the school’s activities and for an hour, two days a week, she was ridden by a very light young girl.

Because of this her mood improved greatly and even her swollen legs returned to normal. A horse Nonnina’s age has no back teeth so she was fed a special diet and was also seen by a veterinarian every three months who found her to be healthy. Unfortunately, in 2009 at the incredible and remarkable age of 44 Nonnina passed away. She was a sweet and patient grandmother to all colts, puppies and humans and, irreplaceable, will forever be missed by the Shelter.