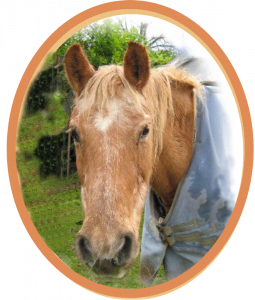 She belonged to a young handicapped boy and helped with his physical therapy. She lived with him for ten years after which he lost interest in her and after she also developed serious elbow problems she was destined for the slaughterhouse. She was rescued and brought to the Shelter where her elbow problems were treated by adding ginger to her feed to keep the elbow elastic.

Even though no longer young Reika didn’t want to retire so being a trustworthy horse but one who couldn’t be overtaxed her riders were children between the ages of three and five.

All these young riders whose first horseback ride was with Reika who was so reliable and reassuring would never have had this experience had she been slaughtered!

In her final years at the Shelter she was finally able to enjoy a well deserved retirement.

Unfortunately in 2011 our dear Reika left us… no words can express how much everyone at the Shelter misses her.