Aqui was brought to the shelter by a truck driver from Bergamo
with the understanding that he would pay for Aqui’s upkeep and veterinary expenses.
After three months Giovanni disappeared leaving us
with incurred expenses of 1600 euros.

Aqui Cour’s story is one that could be told by many horses who like him are emblematic of the exploitation inherent in competitive racing. Horses who after their achievements, races and earnings (Aqui won 65,000 euro racing for his owner) end up being exploited in riding stables.

When they are no longer profitable for the stables they are used for horse therapy and eventually end up at the slaughterhouse. This the fate of most of these noble creatures.

Aqui Cour is a French Thoroughbred born in 1993. He competed until he was seven,victorious in enough races to earn his owner a considerable amount of money. At the end of his career Aqui was sold and began working in riding stables. He was passed from stable to stable beginning his slow descent into hell. In one of the last stables where he worked he suffered a severe injury resulting in a torn Achilles tendon.

Injury after injury rendered Aqui un-rideable. Not even deemed worthy of humane euthanasia he was photographed, from his best angle, and posted on Subito.it as a freebie.

Noticed by a potential new owner he was brought to the Shelter for rehabilitation before being transferred to his permanent new home. However, it was obvious from the initial exams that Aqui was in worse shape than what had been stated. Not only was his Achilles tendon torn and untreated but one knee had a suppurating abscess, his beautiful face was sunburned and eaten by insects and he was severely malnourished.

His new owner decided to board him at the Shelter promising to pay all expenses for his treatment and board. Promises unkept. The owner soon vanished abandoning Aqui with all his problems and health issues.

It was now 2011, Aqui Cour was only eighteen and he became a permanent resident of the Shelter.

The first thing we tackled was his Achilles tendon. Over time Aqui had compensated for his injury by putting too much weight on his right rear leg resulting in pain and inflammation. His quality of life and spirit improved and were maintained with the help of supplements including devil’s claw, ginger and MSM. Massage and electromagnetic blanket therapy became part of his daily regime. His tendon was supported by a structure held in place by a bandage.

This enabled him to walk, lie down and stand unassisted. Aqui started to feel good, live without constant medication and was able to make new friends both equine and human.

Unfortunately in August of 2014 he took a turn for the worse. Eco-graphs and X-rays showed that his right rear leg which compensated for the injured left lacked cartilage and synovial fluid and that the femoral joint lacked cushioning.
Even though walking is painful for Aqui his style and joy of living remain undiminished.

His medical reports were sent to a clinic in Ferrara, one of the best in Italy for equine orthopedics. We soon received the results which were not positive. There was no surgical procedure which could help his condition.
There is one last hope for Aqui, an innovative treatment which consists of intra-articular injections of stanozolol a synthetic anabolic steroid. One injection a week for six weeks at a cost of 100 euro per injection. It will be two or three months after the last injection before we can determine if the treatment has been effective.
If the treatment doesn’t work we’ll continue with pharmaceutical pain management therapy for as long as his system can handle it after which Shelter and veterinary staff are prepared to humanely euthanize Aqui in his paddock where he’ll be surrounded by his friends. A tragic fate caused by a past consisting of unpardonable abuse and neglect.

Let us not become accomplices to stories like these because there are many Aqui Cours, more than one can imagine. Lets put a stop to this chain of suffering. 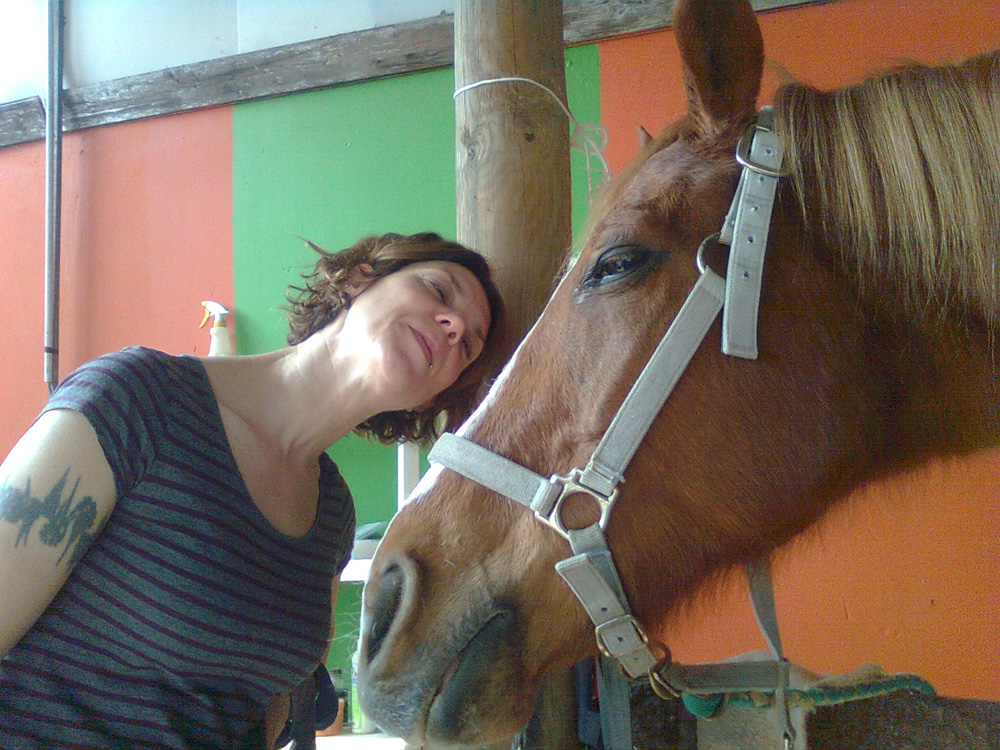