Skip to content
HomeWhiskey and Claudia! A Horse, His Owner and the Stroke.

Hello, my name is Claudia and I’d like to tell you about my experience with Whiskey who would have been thirty years old this December. 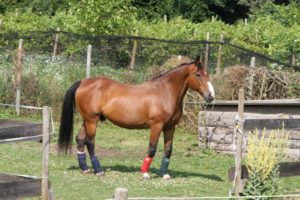 In 2005 I decided to adopt Whiskey, a horse who had been bred to be a jumper but as we know if one is not perfect one is often sidelined and that is what happened to Whiskey.
I had just started volunteering at EZ’s Place, a horse shelter, where I aquired a wealth of theoretical and practical information about the equine world. Whiskey already had an owner, if you could call her that, but for me and Whiskey it was love at first sight, you could say we chose each other. Knowing full well what it would entail I decided, with the help of my mother, to adopt Whiskey because as everyone should know, maintaining a horse is not like maintaing a hamster. I’m also frequently posed questions like “you need to trim a horses hooves?” “why do they have blankets on?” to which I reply “don’t you trim your nails?” “but if you’re cold don’t you cover up?”.
But lets talk about us…over the past three months my horse and I had two life changing experiences which I would like to tell you about. In June a tornado alit at the shelter which destroyed Whiskey’s house and caused a lot of other damage. Luckily no one was injured, truely a miracle. It was an important lesson for both of us, damage can be repaired but life once lost can’t be restored.
My second experience was at the beginning of August when I received a call from Evelyn to tell me that the horse wasn’t well—I ran—and quickly arrived at the shelter to see what was happening. Whiskey was in a bad way. At first, given his symptoms, we suspected heat stroke and decided to intervene with cold showers and cortisone until the first available vet could arrive. As soon as it was confirmed that it could have been heat stroke the vet prepared an IV saline solution to hydrate him, listened to his heart and examined him. In a few hours he seem stabilized.
Little by little we saw a slight improvement, nonetheless, we called our regular vet who came out the following day. With fresh eyes we noticed that Whiskey’s face seemed asymetrical, he acted confused and had difficulty
chewing and swallowing. He no longer swished his tail and didn’t urinate. The only thing he could do was defecate. Then came the awful diagnosis—STROKE!
The blood froze in my veins; I was incredulous. A stroke in a horse is not an everyday occurance. I had no idea what would happen.
With the help of the vet and Evelyn’s wealth of experience we decided to intervene immediately doing all we could with IVs and pharmaceuticals. Whiskey was wonderful about it all and we stayed with him day and night. However, after three days went by without him urinating we realized that the neurological lesion was still active.
All sorts of thoughts were going through my mind but I knew he couldn’t survive in the condition he was in. We sat around the table and I had to come to a decision: put an end to his suffering, my pain was overwhelming and my heart would not let me make that decision. I don’t know if Whiskey had heard us but within an hour or so he started urinating on his own, my eyes lit up with joy!!! I never thought I’d be in seventh heaven over a pee.
The days went by and he regained almost all his motor functions but he still was unable to retract his penis, a very delicate organ. We decided to call the vet for the umpteenth consultation. The area was damaged and we tried to intervene with massages and all else possible but in the end there wasn’t much more we could do. 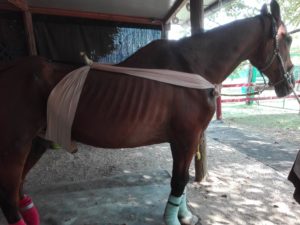 Time to get creative! We fashioned a sort of sling to support his penis in order to prevent it from swelling. Project “Underwear” morphed several times to adapt to Whiskey’s needs.
The vet proposed a possible surgical solution, penile amputation, but that would have entailed post operative pain, a stay in a clinic where he would have been alone and the stress of a long trip to the clinic. Also, the success rate was only 20%.
It was time to make a decision!! Making a decision for another sentient being is difficult, it weighs on your soul because you don’t know if you’ve made the right choice. Well I decided that I wanted to leave him in peace. I didn’t feel it was right to subject him to additional pain and suffering to perhaps buy him four months.
Three months went by and he was fine. Whiskey was a strong horse in body and spirit!
It was an emotional experience…I want to thank all of you who wrote me or asked about him and a special thanks to Evelyn and the staff at EZ’s Place, Montereale Valcellina.

Whiskey is no longer with us. A colic took him a month ago, he passed away serenly surrounded by his dear friends at the shelter.